Our Tax Dollars At Work (Wordless Wednesday) and Words for Wednesday 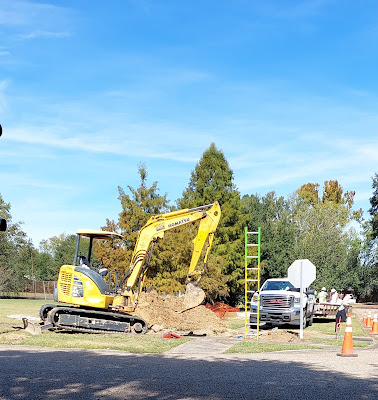 and / or one of these archaic/semi-archaic words

FORSOOTH, it is a good question, so please BEAR with me as i attempt to answer with the above words and without boring you to tears (although if you don't like history, you'll think that isn't possible).

On October 31, 1517, a young monk named Martin Luther published his Ninety-Five Theses, a list of 95 problems he saw with Roman Catholic Church doctrine.  He felt there was a GAP when these doctrines were compared to what he read in Scripture.

He was especially critical of the idea of the sale of indulgences.  The Roman Catholic Church teaches that if you die with small sins that you haven't confessed and had absolved by a priest, you go to Purgatory to finish paying for those sins.  An "indulgence" is a way to reduce the amount of punishment.  Friends and family members were encouraged to pay for indulgences for deceased loved ones, and unscrupulous priests sometimes preyed on those mourning, having them even go into DEBT to buy time out of Purgatory for the deceased.  This even though no priest could say, with any authority, whether your loved one went to Purgatory or not, or whether enough indulgences had been paid for yet.

Most current Protestant teaching holds that sins are forgiven through the work Jesus the Christ (Messiah, Anointed One) did, and cannot be bought.  Most also don't believe in Purgatory at all, since it's not in the Bible.

ANON there was a REACTION, although at first Luther believed he was simply trying to bring the simple WITNESS of Scripture to bear on church teachings.  Like many before and since, his first inclination was not to ditch the Roman Catholic Church wholesale, but to simply DESCRIBE problems he saw in some church teaching and get it changed.

Whether he and the reformers who followed, such as John Calvin and John Knox, are seen as heroes or as WOOD MAD depends upon whether you are a follower of Jesus or not, and of what "denominational flavor" as one friend of mine likes to say.

Right or wrong, Luther was excommunicated from the Roman Catholic Church a few years later and what he and his followers started teaching marked the end of the Middle Ages in Europe, as well as the rise of the Renaissance and the decline of the Pope's influence in the affairs of civil government.

Many churches today, including the one i attend, celebrate the last Sunday of October as Reformation Day or Reformation Sunday.  Because we are Presbyterians, and the Presbyterian denominations in the US hail back to the Church of Scotland, it's a day of celebrating all things Scottish (although most of us draw the line at haggis), as well as celebrating a simple faith as taught in the Bible alone.

105-year-old Julia Hawkins sets a world record as the first woman and first American her age to run 100 meters, in the Louisiana Senior Olympic Games, 2021