This little one was in the shelter to get fluids multiple times a day as she just wasn't gaining weight properly.  She needed a good cleaning, so i gave her one, and then she fell asleep with her little friend.  (She has since been reunited with her littermates in the foster home and is doing well.) 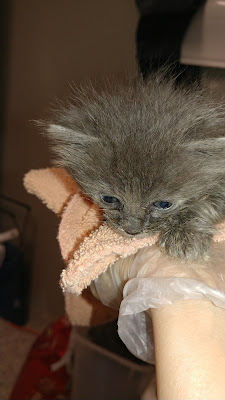 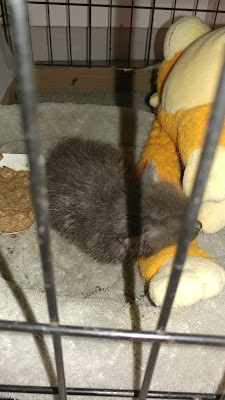 This week the theme is The Best Thing About Spring.

Every year i think i'll write

An ode to the beauties of spring

And every year i realize that it's

Beyond me to do such a thing.

See there's so much that's wonderful

About this special season,

There's just no way to squeeze in

Narrow it down to One Best Thing,

The best thing about spring?

We get to bid winter adieu!

National Meeting Planners Appreciation Day 2021 -- US (you are only obligated to celebrate this if you love meetings, love to plan meetings, or have a meeting planner in your organization to humor)

Francis Bacon is charged with bribery, 1621

A royal charter is granted for Connecticut, 1662

The last total solar eclipse to be observed from London for the next 900 years occurs as predicted by Edmund Halley; called Halley's eclipse as he predicted it to within 4 minutes accuracy and described its path to within 30km, 1715

The Constitution of May 3 (the first modern constitution in Europe) is proclaimed by the Sejm of Polish-Lithuanian Commonwealth, 1791

The Canterbury and Whitstable Railway is opened. It is the first steam hauled passenger railway to issue season tickets and include a tunnel, 1830

The Hudson's Bay Company gives up all claims to Vancouver Island, 1867

The poem In Flanders Fields is written by Lieutenant Colonel John McCrae, 1915

Margaret Mitchell's Gone With the Wind is awarded the Pulitzer Prize, 1937

The Kentucky Derby is televised for the first time, 1951

Lieutenant Colonels Joseph O. Fletcher and William P. Benedict of the United States land a plane at the North Pole, 1952

The first "spam" email is sent by a Digital Equipment Corporation marketing representative to every ARPANET address on the west coast of the United States, 1978

The strongest tornado ever recorded, one of 66 tornadoes recorded that day, with winds of up to 313mph, strikes Oklahoma City, Oklahoma, 1999

The sport of geocaching begins, with the first cache placed and the coordinates from a GPS posted on Usenet, 2000