Kittens can be comfortable almost anywhere, it seems, even with a sibling sleeping on top of her/him. 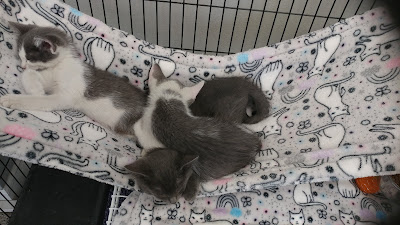 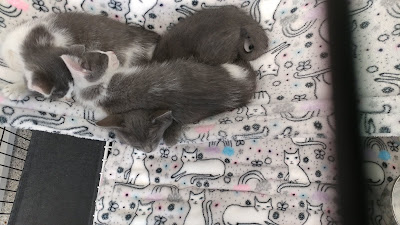 This week the theme is Favorite Breakfast.

When he was just a little guy,

And if his mom would have let him,

He'd even have had it at lunch.

When he was an all-stomach teen,

He'd have eaten a box a day

If the budget had afforded that much.

When he went away to college,

He'd keep some around at finals time

So while studying he could munch.

When he was grown and married,

Sneaking half a box at midnight with a quart of milk,

And hide it from the kids in the china hutch.

His favorite is Cap'n Crunch,

He still likes it a bunch!

(Yes, i'm talking about my Sweetie!)

Dicing for Bibles -- All Saints Church, St. Ives, Huntingdonshire, England (a ceremny dating back to a bequest in 1675 that provides Bibles for poor children of the parish; they play a dice game, in which they try to win one of the 6 Bibles provided)

Queen Victoria of the United Kingdom, 1819

John Wesley is converted, essentially launching the Methodist movement; the day is celebrated annually by Methodists as Aldersgate Day, 1738

Antonio José de Sucre secures the independence of the Presidency of Quito, 1822

"Mary Had a Little Lamb" by Sarah Josepha Hale is published, 1830

The first passenger rail service in US, from Baltimore to Elliots Mill, Maryland, begins, 1830

The Brooklyn Bridge in New York City is opened to traffic after 14 years of construction, 1883

Amy Johnson lands in Darwin, Northern Territory, becoming the first woman to fly from England to Australia (she left on May 5 for the 11,000 mile flight), 1930

Conclusion of the Sixth Buddhist Council on Vesak Day, marking the 2,500 year anniversary after the Lord Buddha's Parinibbana, 1956

Cyprus enters the Council of Europe, 1961

The drilling of the Kola Superdeep Borehole begins in the Soviet Union, 1970

The International Court of Justice calls for the release of United States embassy hostages in Tehran, Iran, 1980

Eritrea  gains its independence from Ethiopia, 1991

15-year-old Sherpa  Temba Tsheri becomes the youngest person to climb to the top of Mount Everest, 2001

London's Metropolitan police remove belongings and sleeping bags of homeless people as part of 'a policy of reducing the impact of rough sleepers on the community', 2013

Kaduna state in Nigeria declares a state of emergency as a moth has destroyed 80% of the tomato crops and factories are shutting down, 2016

Millions of 17-year cicadas emerge in the US South, posing crop danger and noise issues, 2020