Doggie Tug-of-War (Awww Monday), Inspiring Quote of the Week, and In Honor of The Rubber Band (Poetry Monday)

Coda and Lulu got to play on Saturday, and they have finally figured out how to tug-of-war with each other.  That's a good thing, since the people tire out too quickly when playing with either of them, but they can entertain each other for quite a while. 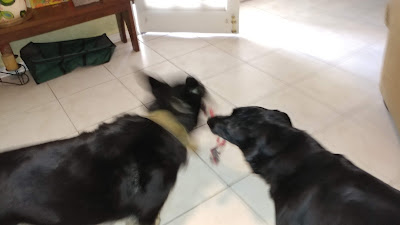 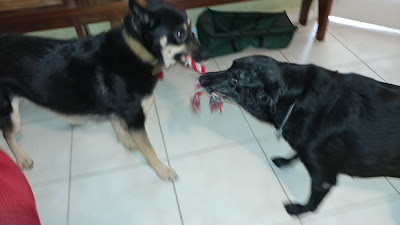 This week the theme is the Anniversary of the Patent of the Rubber Band.  One poem wouldn't suffice for this, so i did a couple of poems and a haiku.  The latter was in honor of the weekly rubber band war at the office a long time ago.

Let's all give a hand

To the lowly rubber band.

If i had to do without,

It would make me scream and shout!

To fly about everywhere.

Would simply sit and molder.

There could be no rubber band fight

To enliven a Tuesday night.

Let's just be glad we have them,

Their invention was a gem.

Children during the office

Much thanks to Stephen Perry

Who patented the now very

Give him an ovation grand!