Kitten season is picking up: 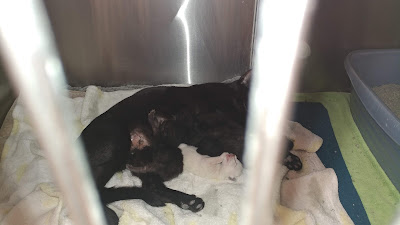 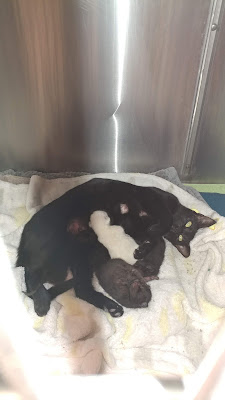 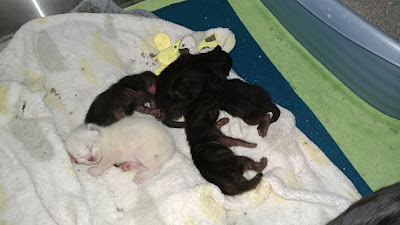 Solid black mama cat, only about 6 months old and desperately affectionate, has four solid black kittens and one solid white!

Poetry Monday was started by Diane at On The Alberta/Montana Border.  Jenny at Procrastinating Donkey is sorely missed.   Charlotte/Mother Owl always participates, and now Karen at Baking in a Tornado is jumping in at least once a month, too.  Spike's Best Mate often leaves a wonderful poem in the comments on one of our blogs.

This week the theme is Lost Sock Memorial Day.

You see them all the time

At the bottom of the hamper,

And ask yourself one question,

To where did the other one scamper?

We put them up with clothespins

On hangers on the wall,

Try to find one that matches,

We want to find them all.

Too often does it happen,

We mourn and shed a tear,

Lost one went to the hozone layer

Remember all those poor lost socks

All the service they did render

Before they went to the great beyond

How they covered your toes with splendor.

Women's Check-up Day 2021 -- US (always the Monday after Mother's Day, encouraging women to be proactive about their health

The Roman armies under Titus open a full scale assault on Jerusalem, 70

Vienna's church orders all Jews to wear a distinctive garb, 1267

Amerigo Vespucci allegedly leaves on a voyage to the New World, 1497

The Barbary pirates of Tripoli declare war on the United States of America, 1801

In India, the first war of Independence begins, 1857

The First Transcontinental Railroad, linking the eastern and western United States, is completed at Promontory Summit, Utah (not Promontory Point, Utah) with the golden spike, 1869

Romania  declares itself independent from Turkey, 1877

The Supreme Court of the United States rules in Nix v. Hedden that a tomato is a vegetable, not a fruit, under the Tariff Act of 1883, 1893

The first Mother's Day is observed, 1908

J. Edgar Hoover is appointed Director of the FBI, 1924

Bill Haley & His Comets release "Rock Around the Clock", the first rock and roll record to reach number one on the Billboard charts, 1954

Deadliest day on the mountain: a rogue storm on Everest claims 8 lives, including experienced climbers, 1996

The Maeslantkering, a storm surge barrier in the Netherlands that is one of the world's largest moving structures, is opened by Queen Beatrix, 1997

Solicitor General Elena Kagan is the youngest Justice and third woman nominated for the Supreme Court of the United States, 2010

An Indian fertility clinic announces that a 70 year old woman has successfully gave birth to a baby boy, 2016

The United States Geological Survey releases a report saying that some glaciers in Montana have receded by 85% in the last 50 years, 2017

Mahathir Mohamad is sworn in as the seventh Prime Minister of Malaysia, the world's oldest leader at 92, 2018