"Does anything really matter?"

"I'm not talking philosophy, I just want to know if there's any use or purpose, or is all the crap I'm going through for nothing."

"Ah, now you are talking religion."

Linking up with Denise at Girlie On The Edge Blog, where she hosts Six Sentence Stories, and the cue is Matter.

A client's neighbor has this very nice arched fence: 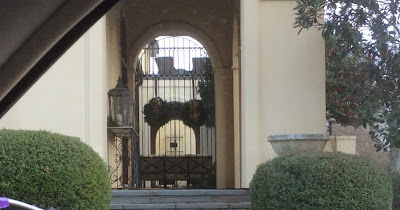 American Historical Association Annual Meeting -- Chicago, IL, US (133rd annual, with over 300 sessions covering a wide range of scholarly topics; this year's theme "Loyalties" and is through the 6th)

Joan of Arc is handed over to the bishop for trial, 1431
Leonardo da Vinci unsuccessfully tests a flying machine, 1496
Martin Luther is formally excommunicated from the Roman Catholic Church, 1521
The first theater in Amsterdam, the Schouwburg, opens, 1638
Benning Wentworth issues the first of the New Hampshire Grants, leading to the establishment of Vermont as a separate state, 1749
Stephen F. Austin receives a grant of land in Texas from the government of Mexico, 1823
Joseph Jenkins Roberts is sworn in as the first president of the independent African Republic of Liberia, 1848
The Meiji Restoration returns authority to Japan's emperors, 1868
Oleomargarine is patented by Henry Bradley, Binghamton, NY, 1871
The wax drinking straw is patented, by Marvin C Stone in Washington DC, 1888
The refracting telescope at the Lick Observatory, then the largest in the world, is put into use, 1888
The first known use of the word automobile was seen in an editorial in The New York Times, 1899
British explorer Howard Carter discovers the sarcophagus of Tutankhamen in the Valley of the Kings, near Luxor, Egypt, 1924
Benito Mussolini announces he is taking dictatorial powers over Italy, dissolves the Italian parliament, 1925
Minnie D. Craig becomes the first female elected as Speaker of the North Dakota House of Representatives, the first female to hold a Speaker position anywhere in the United States, 1933
Frances Bolton and her son, Oliver from Ohio, become the first mother and son to serve simultaneously in the U.S. Congress, 1953
Edmund Hillary reaches South Pole overland, 1958
The West Indies Federation is formed, 1958
Apple Computer is incorporated, 1977
Margaret Thatcher becomes the longest-serving British Prime Minister in the 20th Century, 1988
In Moscow, George H. W. Bush and Boris Yeltsin sign the second Strategic Arms Reduction Treaty (START), 1993
More than seven million people from the former Apartheid Homelands, receives South African citizenship, 1994
The People's Republic of China announces it will spend fight erosion and pollution in the Yangtze and Yellow river valleys, 1977
The Mars Polar Lander is launched, 1999
Australian researchers discover the 1912 plane that was the first taken to Antarctica, 2010
The Ezadeen, an abandoned ship carrying 450 Syrians, is rescued from choppy waters and brought safely to shore in Italy; the ship is the second to be abandoned by human traffickers off the nation's coast in the last four days, 2015
Scientists in Rome unveil the first bionic hand with a sense of touch that can be used outside of a laboratory, 2018
Posted by messymimi at 12:00 AM

Love that gate.
And yes, everything matters.

I like your SSS because you're right everything matters. I see that's it JRR Tolkeins birthday. DD#2 loves the Lord of the Ring triology. She has(had) all of the books, as well as the movies. I'm not sure if she's still a huge fan but when she lived at home she loved the whole series! :)

Have a good day and great New Year, my friend!

I agree, everything does matter! That gate sure is pretty.

I guess it's either all or nothing..

Nice gate. Everything matters. Have a happy day!

Philosophy???? I hated that in University. I enjoyed the girls when I was there. LOL. Happy New Year Mimi.

I loved philosophy. I loved college. I loved my study group. Everything matters.

Have a fabulous day and rest of the week, my friend. ♥

You said it all in 6 sentences ~ Great story but real! Lovely fence photo too ^_^

Nice story. That is a pretty fence too.

True that.
It matters. It must.

I sometimes can't help thinking..."Does it matter? What matters? Does anything matter? Do I matter?"

Of course it all matters! And of course (we) have to know..we always need the answers :D