"Hand me a strip of tape, please -- yes, that's right, and I'll need at least three more about that size."

"I can't believe it broke!"

"I can't believe you slammed it down so hard when it was full."

"I remember when things were durable and built to last and didn't break so easily!  We need to get one that is made of metal, not plastic."

"If it's made of metal, I won't be able to lift it when it's full, so we stick with plastic and we don't slam it down so hard."

Linking up with Denise at Girlie On The Edge Blog, where she hosts Six Sentence Stories, and the cue is Strip.

(The above is an almost verbatim conversation between a husband and wife, can you guess who?)

This fence makes for a nice, cozy hideaway of a back yard: 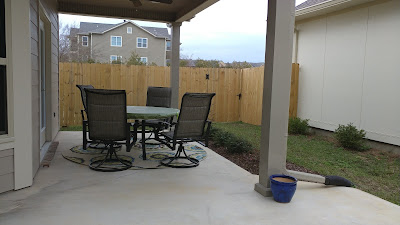 Oregon Truffle Festival -- Eugene, OR, US (celebrating the high-end culinary delight that is the lowly truffle, with seminars, cooking demos, and more; through Sunday)

Winter Carnival -- St. Paul, MN, US (a tradition over 100 years in the making; through February 2)

Caligula, known for his cruel despotism, is assassinated and succeeded by his uncle Claudius, 41
Connecticut colony organizes under Fundamental Orders, 1639
The first Jewish doctor in US, Jacob Lumbrozo, arrives in Maryland, 1656
Henry Knox arrives at Cambridge, Massachusetts with the artillery that he has transported from Fort Ticonderoga, 1776
The University of Calcutta is formally founded as the first full-fledged university in south Asia,1857
The Romania principality arises under King Alexander Cuza, with Bucharest as the capital, 1862
General Baden-Powell's publication of Scouting for Boys starts the Boy Scouts movement, 1908
The Gregorian calendar introduced in Russia by decree of the Council of People's Commissars effective from February 14(NS), 1918
Vincent Massey is sworn in as the first Canadian-born Governor-General of Canada, 1952
A bomber carrying two H-bombs breaks up in mid-air over North Carolina. The uranium core of one weapon remains lost, 1961
Jackie Robinson is elected to Baseball Hall of Fame, 1962
Japanese Sgt. Shoichi Yokoi is found hiding in a Guam jungle, where he had been since the end of World War II, 1972
Soviet satellite Cosmos 954, with a nuclear reactor on board, burns up in Earth's atmosphere, scattering radioactive debris over Canada's Northwest Territories. Only 1% is recovered, 1978
The first Apple Macintosh goes on sale, 1984
Voyager 2 passes within 81,500 km (50,680 miles) of Uranus, 1986
Japan launches Hiten, the country's first lunar probe,and the first lunar probe launched by a country other than Soviet Union or the United States, 1990
Lara Giddings becomes the first female Premier of the Australian state of Tasmania , 2011
European Bioinformatics Institute scientists announce they have successfully stored audio and text on fragments of DNA, and retrieved them with 99.99% accuracy - the first time in history DNA has been used for data storage, 2013
On this 10th anniversary of the Opportunity rover landing on Mars, NASA announces the rover has discovered clay minerals indicating water flowed on Mars early in the planet's history, 2014
Officials at the World Health Organization state that the number of new Ebola cases is rapidly declining, signaling a reversal of the epidemic, 2015
Posted by messymimi at 12:00 AM

Love that hideaway. Sadly I am all too familiar with someone who plays a bit rough with kitchen implements.

Very believable scenario, even without the footnote!

So true, these days things are not made to last. I like that fence!

I'd be the slammer. Hubby is very patient. Me not so much. It always makes me feel better after a big slam. Doesn't happen often, but now and then.


wait! I know this one!!
lol
well, not to say he's right but.... (those of us who hail from Y Chromia kinda stick together)