You can call it fate or destiny or whatever you want, it really came down to the fact that i was getting equipment out of the car, and Sweetie went to the door first.

He rang the bell to let the clients know we were there, and even from the car i could hear the dog was barking before the door opened.

Henri, the Bichon Frise, apparently doesn't like the doorbell, and barks even when he hears one on TV.

He pushed his way past the door as soon as it was opened and defended his territory, biting Sweetie's leg; the very thick jeans he was wearing protected him, but one tooth actually caused the denim material to scratch his skin, without the tooth even penetrating the material.

A bit of rubbing alcohol and a band-aid was all that was needed, and it has scabbed and is healing well.

The clients were more upset than we were, and Henri let both of us pet him once he calmed down, he's really a good dog, just excitable when he hears the doorbell.

Linking up with Denise at Girlie On The Edge Blog, where she hosts Six Sentence Stories, and the cue is Destiny.

It wasn't so much the fence as the sunbeams that made even an old fence look more interesting than it usually is: 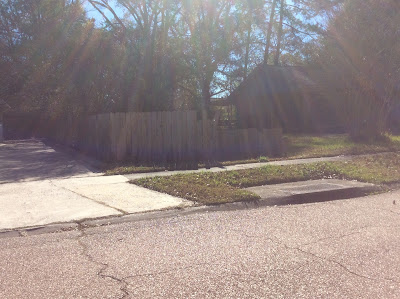 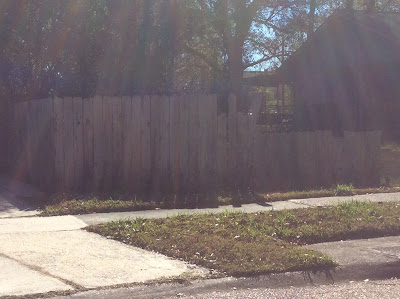 Creativation -- Phoenix, AZ, US (largest Craft and Hobby Association show of the year; through the 21st)

Milwaukee Boat Show -- Milwaukee, WI, US (where boys can find their big toys; through the 27th)

Wings Over Willcox -- Willcox, AZ, US (tours of the playa and wetlands, birding, workshops, and more; through Sunday)

Pope Gregory XI moves the Papacy back to Rome from Avignon, 1377
Cesare Borgia returns in triumph to Rome from Romagna, 1501
Giovanni da Verrazzano begins his voyage to find a passage to China, 1524
The Edict of St Germain recognizes Huguenots in France, 1562
England's Long Parliament passes the Vote of No Addresses, breaking off negotiations with King Charles I and thereby setting the scene for the second phase of the English Civil War, 1648
An avalanche destroys every building in Leukerbad, Switzerland, kills 53, 1718
Capt James Cook becomes the first to cross Antarctic Circle (66° 33' S), 1773
The first cable car patented, by Andrew S Hallidie (begins service in 1873), 1871
Queen Liliuokalani is deposed, the Kingdom of Hawaii becomes a republic, 1893
Sir Robert Falcon Scott reaches the South Pole, one month after Roald Amundsen, 1912
The first fully automatic photographic film developing machine patented, 1928
Swedish diplomat Raoul Wallenberg, credited with saving tens of thousands of Jews from the Nazis, is arrested by secret police in Hungary, 1945
The United Nations Security Council holds its first meeting, 1946
The Goldbergs, the first sitcom on American television, first airs, 1949
The Great Brinks Robbery - 11 thieves steal more than $2 million from an armored car Company's offices in Boston, Massachusetts, 1950
The world's first nuclear-powered submarine, the Nautilus, makes its maiden voyage, 1955
A B-52 bomber collides with a KC-135 Stratotanker over Spain, dropping three 70-kiloton nuclear bombs near the town of Palomares and another one into the sea in the Palomares incident, 1966
Harald V becomes King of Norway on the death of his father, Olav V, 1991
The Czech Republic applies for membership of the European Union, 1996
Mount Nyiragongo erupts in the Democratic Republic of the Congo, displacing an estimated 400,000 people, 2002
Rioting begins between Muslim and Christian groups in Jos, Nigeria, which resulting in at least 200 deaths, 2010
Japan unveils plans to build the world’s largest wind farm near the Fukushima Daiichi Nuclear Power Plant, 2013
Academics report that a pelvis bone discovered in Winchester 1999 may belong to King Alfred the Great or his son, Edward the Elder, 2014
Posted by messymimi at 12:00 AM