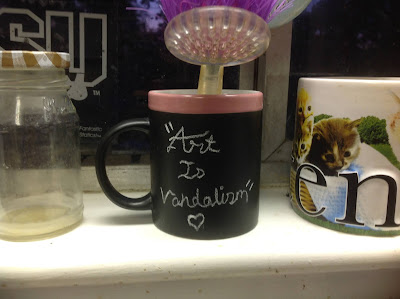 This week, the words are

"Alan, June, it's wonderful to have you here, kiddos!"

Aunt Marigold had opened the door before they'd even knocked.  She was dressed in a muumuu and had an avocado in one hand.

"Well, don't just LOLLYGAG on the porch, come on in!" she opened the door wide.  "Your room is the second on the right down the hallway."

"Um, how did you know we were here?" June asked.  As much as she'd grown fond of Alan's eccentric aunt, she was still a bit nervous around her at times.

"I have NINJA skills!" Aunt Marigold grinned.  Then, "Actually, I saw you heading up to the porch through the kitchen window where I was making GUACAMOLE to go with supper.  You two run along and put your suitcases in your bedroom, and come talk to me in the kitchen.  We're going to have supper in the GAZEBO.  I was so glad to see this house had a wraparound porch and the gazebo, I thought, 'HUZZAH, suppers outdoors!' and I love dining al fresco."

Alan and June dutifully headed down the hall Aunt Marigold had pointed out, opening the door to the second bedroom on the right.  It was a spacious room and ensuite, tastefully decorated.  They took a few moments to look around, even stepping out onto the porch through the sliding glass door, and setting the suitcases in the large closet.

Back in the kitchen, Aunt Marigold was in fine fettle.  "I'm so glad you two are the first to arrive," she said.  "Hand me that THINGAMAJIG, would you Alan?"

"This potato masher?" he asked, and she responded, "Yes, that's the ticket."

"Aunt Marigold, we really want to thank you so much for hosting the family reunion," Alan said.

June added, "You've chosen a lovely place to rent for all of us, we appreciate it so much!"

"Oh, PIFFLE, it's nothing, kiddos!  I love having a reunion like this every few years, the family needs it.  This time, I didn't want any FIASCO like the time we tried a cruise together.  Don't get me wrong, cruises are great, but not with as many people as we have.  Alan, remember how we kept losing the cousins?"

"Those children can SKEDADDLE faster than anything you've ever seen, especially when they want to go sneak more ice cream.  Always up to some monkey-shines or MALARKY.  Speaking of, here they come!"

Another set of relatives arrived, followed closely by more -- a PANDEMONIUM occurred as cousins and aunts and uncles and parents and Aunt Marigold's brother, Alan's grandfather, all arrived in waves, lots of hugging and hellos and running around looking for bedrooms.

"How's my NITWIT big brother?" Aunt Marigold teased her brother as if they were still children.

He grinned back at her, and said, "Careful, I might go find an EARWIG and chase you with it!"

"So I can go BERSERK?" she grinned back.  "Did I ever tell you younger ones about the time my brother chased me with one of those things, and what I did to get him back?"

Alan looked at his grandfather and great aunt, and responded, "No, but I am guessing we're going to hear a great story after supper!"

The American University is chartered by an act of the Congress of the United States of America, 1893

In the first imperial coronation by a pope,Charles V is crowned by Clement V, 1530

Pope Gregory XIII, by decree, institutes what is now known as the Gregorian Calendar, correcting the older Julian Calendar, 1582

L'Orfeo by Claudio Monteverdi, one of the first works recognized as an opera, receives its première performance, 1607

The London première of Rinaldo by George Frideric Handel, the first Italian opera written for the London stage, 1711

The Treaty of Dancing Rabbit Creek, the first removal treaty in accordance with the Indian Removal Act, is proclaimed. The Choctaws in Mississippi cede land east of the river in exchange for payment and land in the West, 1831

The first parade to have floats is staged at Mardi Gras in New Orleans, Louisiana, 1868

Andrew Johnson becomes the first President of the United States to be impeached, 1868

The SS Gothenburg hits the Great Barrier Reef and sinks off the Australian east coast, killing approximately 100, including a number of high profile civil servants and dignitaries, 1875

Chicago is selected to host the Columbian Exposition, 1890

Rudolf Diesel receives a patent for the diesel engine, 1893

National Public Radio is founded in the United States, 1970

The United States Olympic Hockey team completes their Miracle on Ice by defeating Finland 4-2 to win the gold medal, 1980

Buckingham Palace announces the engagement of The Prince of Wales and Lady Diana Spencer, 1981

A special commission of the U.S. Congress releases a report that condemns the practice of Japanese internment during World War II, 1983

The last occurrence of February 24 as a leap day in the European Union and for the Roman Catholic Church, 1996*

Japan launches its fourth spy satellite, stepping up its ability to monitor potential threats such as North Korea, 2007

Fidel Castro retires as the President of Cuba after nearly fifty years, 2008

Pope Francis creates a second Secretariat within the Vatican and gives it the power to audit any Vatican agency at any time, 2014

The Journal of the Proceedings of the National Academy of Sciences publishes a study of the first animal that doesn't need oxygen to breathe, a tiny parasite living in salmon tissue, 2020

*The Romans counted Feb. 24 twice in leap years, instead of adding Feb. 29; that continued in many places until 1996