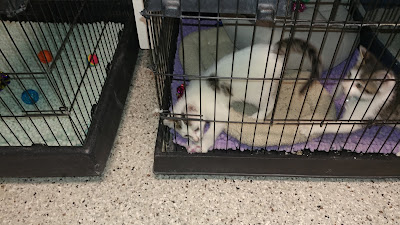 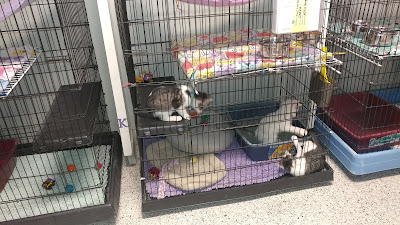 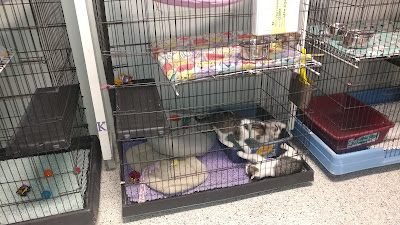 Poetry Monday was started by Diane at On The Alberta/Montana Border.  Jenny at Procrastinating Donkey is on a blog break and we miss her a lot.   Charlotte/Mother Owl always participates, and now Karen at Baking in a Tornado is jumping in on some topics, too.  Spike's Best Mate often leaves a wonderful poem in the comments on one of our blogs.

This week the theme is From A Pet's Point Of View.

I get to go read the doggy news!

Smell what was out here last night,

Get other critters opinions and views.

Right here I smell a 'possum,

I know that he was here,

And the dog next door almost caught him,

The evidence is clear.

The dog next door was roaming,

He must have slipped through the gate,

That boy just loves to get out

And stay out very late.

The poodle from around the block

And her owner passed this morn,

I can tell she's gonna have puppies,

I wonder when they'll be born?

Boy, there's lots of bugs out,

And those squirrels, they really tease,

I smell that they've been through here,

Jumping in and out of the trees.

My Dachshund friend from around the block,

And Taz, the big ol' hound

We'll play when they come back around.

Well, that's all I have time for,

My person's calling me back,

I have fun keeping track!

Lundi Gras -- Fat Monday, Carnival, one of the last to days to feast before the Lenten fast begins Wednesday

Bolludagur -- Iceland (Bun Day, the children wake the parents with a "spanking" while calling for cream buns that will be eaten that day)

Old Mask Parade -- Oranjestad, Aruba (with the Burning of the Momo tomorrow, marking the end of Carnival)

Philosopher Socrates is sentenced to death, BC399

Khosrau II is crowned as king of Persia, 590

The city of St. Louis, Missouri, is founded by Pierre Laclade Ligue as a French trading post, 1764

The first US printed ballots are authorized, in Philadelphia, 1799

Sarah Roberts is barred from attending a white school in Boston, 1848

A fire in Rotterdam, Netherlands, damages the Museum Boymans, 1864

American President Rutherford B. Hayes signs a bill allowing female attorneys to argue cases before the Supreme Court of the United States, 1879

The first Teddy Bear is introduced in America, made by Morris and Rose Michtom, 1903

Gerald Lankester Harding and Roland de Vaux begin excavations at Cave 1 of the Qumran Caves, where they will eventually discover the first seven Dead Sea Scrolls, 1949

The Soviet Union and the People's Republic of China sign a mutual defense treaty, 1950

Canada and the United States agree to construct the Distant Early Warning Line, a system of radar stations in the far northern Arctic regions of Canada and Alaska, 1954

A new red-and-white maple leaf design is adopted as the flag of Canada, replacing the old Canadian Red Ensign banner, 1965

The decimalisation of British coinage is completed on Decimal Day, 1971

The 1976 Constitution of Cuba is adopted by the national referendum, 1976

The drilling rig Ocean Ranger sinks during a storm off the coast of Newfoundland, killing 84 rig workers, 1982

The Soviet Union officially announces that all of its troops have left Afghanistan, 1989

At the Xichang Satellite Launch Center in China, a Long March 3 rocket, carrying an Intelsat 708, crashes into a rural village after liftoff, killing an unannounced number of people, 1996

First draft of the complete Human Genome is published in Nature, 2001

YouTube, the Internet site on which videos may be shared and viewed by others, is launched in the United States, 2005

IBU Female Rookie of the Year Hanna Öberg of Sweden wins the individual biathlon gold medal with 4 clean shootings at the Pyeongchang Winter Olympics in the first victory and podium of her career, 2018

Beijing orders people returning after a Lunar New Year holiday to self-quarantine in an attempt to stop the spread of Covid-19, 2020