Here’s Ranger, about 20 minutes before he went to his forever home. 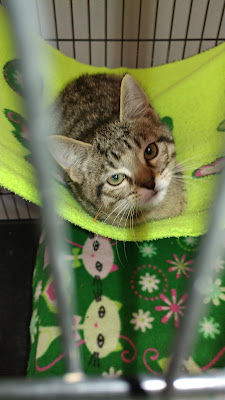 Poetry Monday was started by Diane at On The Alberta/Montana Border.  Jenny at Procrastinating Donkey is on a blog break and is sorely missed.   Charlotte/Mother Owl always participates, and now Karen at Baking in a Tornado is jumping in some weeks, too.  Spike's Best Mate often leaves a wonderful poem in the comments on one of our blogs.

This week the theme is Favorite Words That Start With the Letter D.

It has a certain ring

Without it there'd be something missing

In the fun word "ding-a-ling"!

We wouldn't have "dynamic,"

Floor and door would no longer rhyme.

The best word we have with D though

It's "daddy" that's the winner!

Abu Simbel Festival -- Egypt (one of the two days a year when the light illuminates the statutes of Rameses, Ra and Amun in the temple complex)

Jews are expelled from Zurich, Switzerland, 1349

The English House of Lords rules that authors do not have perpetual copyright of their material, 1774

Jews are expelled from the outskirts of Warsaw, Poland, 1775

The first US ship to trade with China, the "Empress of China," sails from New York, 1784

The Last Invasion of Britain by the French begins near Fishguard, Wales, 1797

Spain signs the Adams-Onis Treaty, renouncing its claim to the Oregon territory and west Florida, 1819

Spain sells east Florida to the US, 1821

Edward Payson Weston, "The Father of Modern Pedestrianism," who gave lectures on the health benefits of walking, first comes into the public eye by leaving on this date to walk to Lincoln's inauguration, a distance of 478 miles, 1861*

John Reid of Scotland establishes a 3 hole golf course near Yonkers, New York, thus introducing the game to the US, 1888

Hawaii becomes a US territory, 1900

Due to drought, the US side of Niagara Falls runs short of water, 1903

The Great White Fleet, the first US fleet to circumnavigate the globe, returns to Virginia, 1909

In Lake Placid, New York, the United States hockey team defeats the Soviet Union hockey team 4-3, in what is considered to be one of the greatest upsets in sports history, 1980

In Roslin, Scotland, scientists announce that an adult sheep named Dolly had been successfully cloned, 1997

At age 34, Mario Matt of Austria becomes the oldest champion in Olympic alpine skiing history with the slalom gold medal at Sochi, 2014

10 million people are without water in Delhi after caste protests in Jat sabotage the Munak water canal, 2016

The discovery of 7 Earth-sized planets orbiting star Trappist-1 is announced in the Journal "Nature", 2017

The Journal “Science” publishes the evidence that Neanderthals were the first artists, creating cave paintings in Spain over 65,000 years ago, 2018

*Yes, he got there in 10 days, in time for the inaugural ball!