I Still Smell It! (Awww Monday), Inspiring Quote of the Week, and Hooked (Poetry Monday)

While Coda was here, she went out for her last potty trip for the night and cornered a 'possum.  As soon as i realized what was up, i called her to come inside, and she did, albeit reluctantly.

The next morning, she was fascinated with the spot at the wall where the poor critter was crouched the night before, she wouldn't quit going over there and sniffing around. 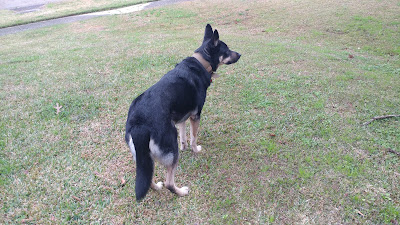 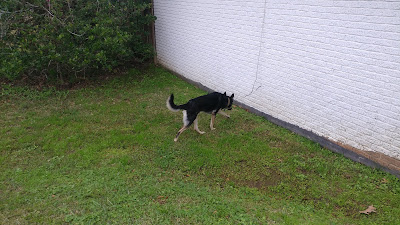 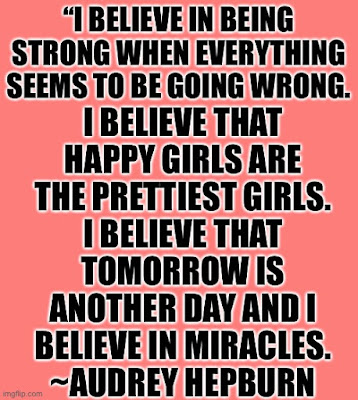 Poetry Monday was started by Diane at On The Alberta/Montana Border.  Jenny at Procrastinating Donkey is on a blog break and we miss her lots.   Charlotte/Mother Owl always participates, and now Karen at Baking in a Tornado is jumping in, too.  Spike's Best Mate often leaves a wonderful poem in the comments on one of our blogs.

This week the theme is Craziest Vacation Memory.

While i'm not much for fishing,

My kids were always thrilled

When to Florida we would go

Too young to be out there alone,

When they'd head to the dock

An adult had to go along,

Often i was on the clock.

It was never my very

Favorite thing to do,

But when your name is "mom"

You've got to see it through.

Well one day we were out there,

They fished, i baited hooks,

Small fish got fed to the birds

It was #2 Son and Little Girl,

And their cousin, my niece Bryn,

They were going to have a contest,

Who caught the biggest would win.

The fish were slow in biting,

Although they were nibbling bait,

And it was getting late.

Bryn had caught a couple,

And Son had gotten one,

All were having fun.

Little Girl swung back to cast,

Of course, she meant no harm

Next thing i knew, i had a hook

In the skin of my upper arm!

It didn't hurt at all, you see,

It didn't even bleed,

It just went through a little skin

And me, well i just laughed,

One small nick, i was un-gaffed.

Since there really was no damage,

We stayed and kept dropping hooks in,

Eventually though, i declared enough,

We said Little Girl did win.

#2 Son caught one that day,

And Bryn, well she caught three,

As for my sweet Little Girl,

That day she caught me!

Love May Make the World Go 'round, But Laughter Keeps Us from Getting Dizzy Week -- anually, the week before and including Valentine's Day; dedicated to Victor Borge’s notion that “Laughter is the shortest distance between two people” and Joel Goodman’s notion that “Seven days without laughter makes one weak.”

"Flora; or the Hob in the Well"(Cibber's Opera, first opera performed in the Colonies), 1735

Mary, Queen of Scots, is executed on suspicion of having been involved in the Babington Plot to murder her cousin, Queen Elizabeth I, 1587

Isaac Newton reads his first optics paper before the Royal Society in London, 1672

A doctor in Salem Village, Massachusetts Bay Colony suggests that two girls in the family of the village minister may be suffering from bewitchment, leading to the Salem witch trials, 1692

The Supreme Privy Council is established in Russia, 1726

Martin Robinson Delany becomes the first black major in the US Army, 1865

The Boy Scouts of America is incorporated by William D. Boyce, 1910

D.W. Griffith's controversial film The Birth of a Nation premieres in Los Angeles, 1915

The Stars and Stripes newspaper is published for the first time, 1918

Radio arrives at the White House, 1922

The NASDAQ stock market index opens for the first time, 1971

After 84 days in space, the crew of the first American space station Skylab returns to Earth, 1974

A freak storm in the Hindukush mountains of Afghanistan triggers a series of at least 36 avalanches, 2010