"How do we decide if the situation really is as critical as they claim?" she asked, shaking her head as if to clear it.

"That's a great question," he told her, adding, "and I wish I had the answer."

For the third time that season, the "weather dudes," as that family called them, were being almost apoplectic in their insistence that this time it was the real deal and everyone needed to evacuate.

It wasn't an easy choice for this family, as money for travel was non-existent, the only car that could have remotely held everyone and all the pets was not reliable for being put on the freeway, and if they left and nothing happened but they got stuck trying to get back (as had happened before when the traffic back in was a nightmare), desperately needed jobs would be on the line.

The decision to stay and white-knuckle it was not made easily, and neither of them slept well until the storm turned and they knew they would get rain and nothing else.

It gave them breathing space, until the next time.

Linking up with Denise at Girlie On The Edge Blog, where she hosts Six Sentence Stories, and the cue is Critical.

Gosia, of Looking for Identity, has taken over Good Fences so that it's now Good Fences Around The World.  Post a picture of a fence or gate, link back to her blog, and go visit other blogs to see what interesting fences there are out in this big world.

This fence within a fence was near Grandma's house, and i'd never seen anything quite like it before.  A white, semi-circular fence that is open on one side, inside of the regular yard fence. 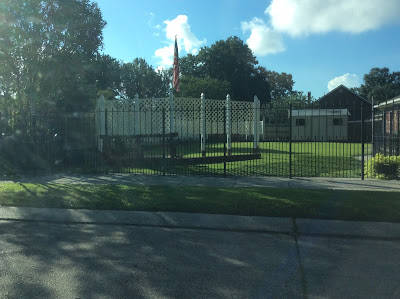 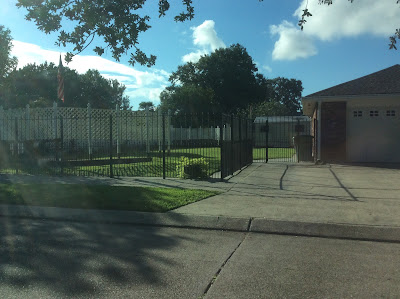 National Great American Beard and Moustache Championships -- Richmond, VA, US (check out some of the former competitors here; through Sunday)

World Maritime Day -- UN and IMO (this year's theme is "IMO 70: Our Heritage -- Better Shipping for a Better Future"; this provides opportunity to both take stock and look back at 70 years since the Organization was established, and look forward to addressing current and future challenges)

Severe earthquake in the Gulf of Chili, China; reports of 100,000 killed, 1290
Jesuits founded by Ignatius Loyola, 1540
John Adams negotiates peace terms with Britain, 1779
Constitution submitted to the states for ratification, 1787
Jean-Francois Champollion announces that he has deciphered the Rosetta Stone, 1822
The Stockton and Darlington Railway opens, and begins operation of the world's first service of locomotive-hauled passenger trains, 1825
The physics journal Annalen der Physik published Albert Einstein's paper "Does the Inertia of a Body Depend Upon Its Energy Content?", introducing the equation E=mc²,1905
The first production of a Ford Model T automobile rolls off the line at the Piquette Plant in Detroit, Michigan, 1908
First test of a twin engine airplane, in France, 1910
Native American Day is first celebrated, 1916
Democratic National Committee votes to allow female members, 1919
The first Santa Clause Training School opens in Albion, NY, 1937
The Balinese tiger is declared to be an extinct species, 1937
Sierra Leone joins the United Nations, 1961
Richard Stallman announces the GNU project to develop a free Unix-like operating system, 1983
East Timor joins the United Nations, 2002
CNSA astronaut Zhai Zhigang becomes the first Chinese person to perform a spacewalk while flying on Shenzhou 7, 2008
NASA's Mars rover Curiosity discovers direct evidence of a fast-moving stream bed, showing a prior water source on the Red Planet, 2012
Thai Ex-Prime Minister Yingluck Shinawatra found guilty of criminal negligence in rice subsidy scheme, sentenced to 5 years in absentia, 2017
Posted by messymimi at 12:00 AM