Just because Sandee of Comedy Plus has stopped hosting a Silly Sunday blog hop, don't expect me to quit telling Cajun jokes.

The other day i found myself in the situation of having to ask for a wifi password, and it reminded me of Boudreaux an' his bar, de Hubba Hubba.

Boudreaux had done decide he goin' be up to date an' keep up wit' de motel an' de laundrymat, so he get wifi fo' de bar.

An' Boudreaux say, "Mais oui, you gotta buy a beer."

An' Boudreaux say, "It be 'yougottabuyabeer,' no spaces, all little letters!"

While weeding at Mr. BA's house yesterday, i snapped a couple of photos of flowers: 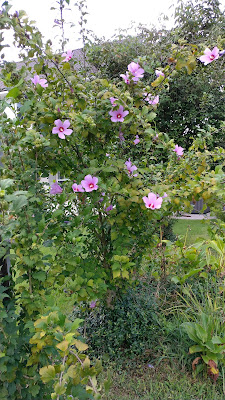 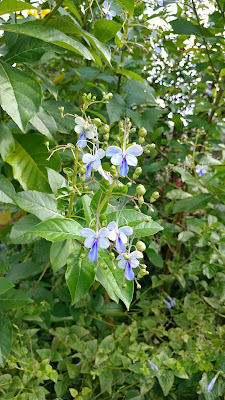 He is very excited that the butterflies are back, and while i couldn't get any of them to sit still for a photo op, i did get two honeybees: 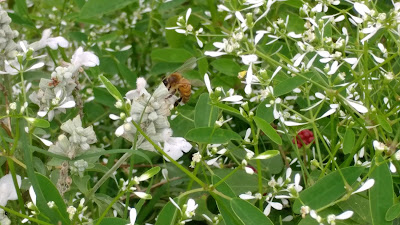 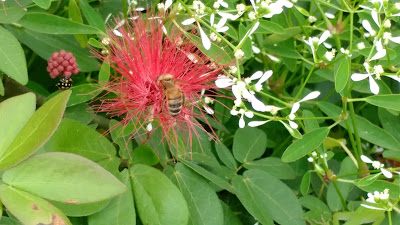 If you look to the left in that second photo, there's a ladybug.  When i tried to focus on her, she ran off and i thought i had missed her entirely.

Cicero's first Philippic (oratorical attack) on Marc Antony, BC44
Pharaoh Cleopatra VII of Egypt declares her son co-ruler as Ptolemy XV Caesarion, BC44
Octavian's troops win the Battle of Actium which ends the Final war of the Roman Republic, BC31
The Great Fire of London breaks out and burns for three days; it ends with 8 dead and 13,000 houses destroyed, 1666
Great Britain adopts the Gregorian calendar, nearly two centuries later than most of Western Europe, 1752
US Treasury Dept. is established by Congress, 1789
The solar super storm continues to affect electrical telegraph service, 1859
Theodore Roosevelt adivses the US to "Speak softly, and carry a big stick." 1901
President Ngo Dinh Diem of South Vietnam becomes the first foreign head of state to make a state visit to Australia, 1957
The Principality of Sealand is established, ruled by Prince Paddy Roy Bates, 1967
Swissair Flight 111 crashes near Peggys Cove, Nova Scotia; all 229 people on board are killed, 1998
Pope Benedict hosts an eco-festival, "Save Creation Day," in Loreto, Italy, to encourage Catholics to live an eco-friendly lifestyle, 2007
Ending a 50-year ban on veiled female news presenters, Egypt's state television gives its female presenters a choice of wearing, or not wearing, a veil, 2012
Swimmer Diana Nyad makes history, becoming the first person to swim from Cuba to Florida without a shark cage, 2013
The public learns about AT&T's The Hemisphere Project, which gives telephone call data to law enforcement agencies, including the DEA, 2013
Posted by messymimi at 12:00 AM

Have a fabulous and blessed Sunday. ♥

Next he will change it to firstbuyabeerandashot

oooh! You've reminded me I need to go put my starter studs back into my ears for a while... Thank You! :-)

Love your flower shots. Capturing bees is something I find very, very difficult.

That was a great joke :)

Boudreaux humor slays me. At first I thought the second flower had a raspberry in it. I had to enlarge to see that it was indeed a ladybug.