"Honey, I'm out of that stuff again!"

"The one that's supposed to help you not lose your memory, you know, the one with the name I can never remember!"

"The memory supplement with the name you can't remember -- I don't think it's working!"

Linking up with Denise at Girlie On The Edge Blog, where she hosts Six Sentence Stories, and the cue is Supplement.

Please note that the above story is an actual conversation, the names will not be said out loud to protect the gullible.

Gosia, of Looking for Identity, has taken over Good Fences, and it's now Good Fences Around The World.  Post a picture of a fence or gate, link back to her blog, and go visit others blog to see what interesting fences there are out in this big world.

A white picket, always a hit with me: 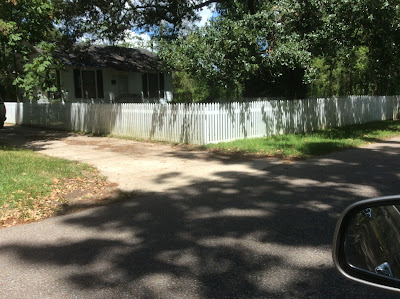 Eleven Days of Global Unity -- Day 3, Environment (sponsored by We, the World)

The temple of Jupiter on Rome's Capitoline Hill is dedicated on the ides of September, BC509
Building begins on Hadrian's Wall, 122
St. Francis of Assisi receives stigmata, 1224
Michelangelo begins work on his statue of David, 1503
Henry Hudson reached the river that would later be named after him, 1609
NYC becomes the first capital of the US, 1788
US Government takes out its first loan from NYC banks, 1789
Six teenage military cadets known as Niños Héroes die defending Chapultepec Castle in the Battle of Chapultepec, 1847
Vermont railroad worker Phineas Gage incredibly survives a 3-foot-plus iron rod being driven through his head; the reported effects on his behavior and personality stimulate thinking about the nature of the brain and its functions, 1848
Hannibal Goodwin patents celluloid photographic film, 1898
Lusitania completes her maiden voyage, arriving in NYC, 1907
The temperature (in the shade) at Al 'Aziziyah, Libya reaches a world record 57.8*C (136.04*F), 1922
Elizabeth McCombs is the first woman elected to the New Zealand Parliament, 1933
Chiang Kai-shek elected president of the Republic of China, 1943
IBM introduces the first computer disk storage unit, the RAMAC 305, 1956
Hurricane Gilbert is the strongest recorded hurricane, based on barometric pressure, in the Western Hemisphere, 1988*
Largest anti-Apartheid march in South Africa, led by Desmond Tutu, 1989
The Declaration on the Rights of Indigenous Peoples was adopted, 2007
Hurricane Ike makes landfall, damaging Galveston Island, Houston, and surrounding area, 2007
Jan van Eyck is credited as the painter of 'The three mary's at the tomb' a painting from the 1430's held in a Rotterdam museum, 2012
EU Migrant Crisis: Germany introduces temporary border controls to cope with huge migrant numbers, 2015
Residents of a nursing home in Hollywood, Florida, are finally rescued after losing their air conditioning due to Hurricane Irma; 11 do not survive, 2017
UN Secretary-General Antonio Guterres says the Rohingya refugee crisis now "catastrophic" as 370,000 confirmed to have fled Myanmar, 2017