What a Difference (Six Sentence Story) and Good Fences

We started out with about a dozen of us, determined to get through things together, first high school, then college, then life.

Dan and Kate married and stayed together, Bob and Roxy married and didn't, the rest of us found or didn't find love outside of our circle.

We all stayed friends, more or less, mostly more, at least when we could, some closer than others because of physical proximity.

When Keith suddenly died of a heart attack, it hit all of us very hard; at his funeral I kept wondering, how did we get to this point?

Linking up with Denise at Girlie On The Edge Blog, where she hosts Six Sentence Stories, and the cue is Difference.

Gosia, of Looking for Identity, has taken over Good Fences, and it's now Good Fences Around The World.  Post a picture of a fence or gate, link back to her blog, and go visit others blog to see what interesting fences there are out in this big world.

This old red brick fence is one i pass at least once a week: 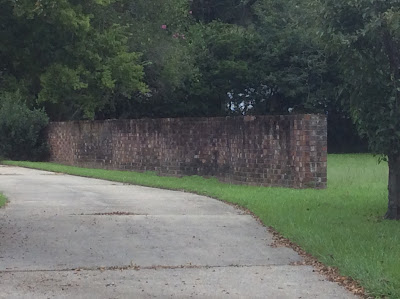 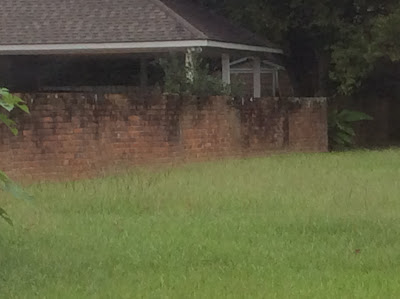 Festa Della Rificolona -- Florence, Italy (one of Florences oldest and most colorful celebrations; through tomorrow)

Fight Procrastination Day/National Do It Day

Heritage Open Days -- UK  (What's on your doorstep?  Go find out, explore for free places that often charge admission or are not usually open to the public, castles to cottages to battlefields, all over the country; through the 9th and again the 13th-16th)

Read A Book Day -- can't find the history on who set it for today and why, but enjoy!

Rettir -- Iceland (around this time of year; a traditional sheep round up celebrated in Iceland during September and into October, actual round up dates may vary from region to region)

Toronto International Film Festival -- Toronto, ON, CA (through the 16th)

The Victoria, the only surviving ship of Ferdinand Magellan's expedition, returns to Sanlúcar de Barrameda in Spain, becoming the first ship to circumnavigate the world, 1522
The Spanish "Silver Fleet" disappears off the Florida Keys, 1622
Founding of Salem, Massachussetts, 1628
The first US lighthouse is built in Boston, 1716
Hurricane hits Martinique and Guadalupe, hundreds of ships sink and thousands die on land and at sea, 1776
Thomas Blanchard patents the lathe, 1819
Oberlin Collegiate Institute of Ohio becomes co-ed, with 4 women and 30 men in attendance, 1837
Louisa Ann Swain of Laramie, Wyoming becomes the first woman in the United States to cast a vote legally after 1807, 1870
Juliana becomes Queen of the Netherlands, 1948
Canada's first television station, CBFT-TV, opens in Montreal, 1952
Nine Israeli athletes are killed during a rescue attempt after being kidnapped at the Munich Olympic Games; two had died during the kidnapping the day before, 1972
The Soviet Union recognizes the independence of the Baltic states:
Estonia, Latvia and Lithuania, and restores the name St. Petersburg to Russia's second largest city, 1991
Cal Ripken Jr of the Baltimore Orioles plays in his 2,131st consecutive game, breaking a record that stood for 56 years, 1995
Diana, Princess of Wales is laid to rest in front of a television audience of more than 2.5 billion, 1997
China launches an investigation into its commercial pilots upon learning that more than 200 of them had falsified their resumes, 2010
Central Australia reports the first sighting since 1960 of a Central rock rat, 2013
Asteroid 2014 RC makes a close approach to Earth (39,900 km; 24,800 mi), 2014
British archaeologists announce the discovery of a Neolithic "superhenge" under 3ft of earth at Durrington Walls, 2015
Posted by messymimi at 12:00 AM